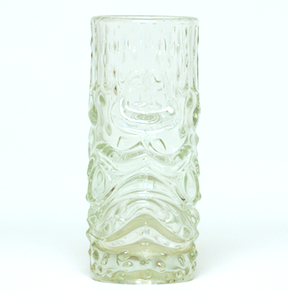 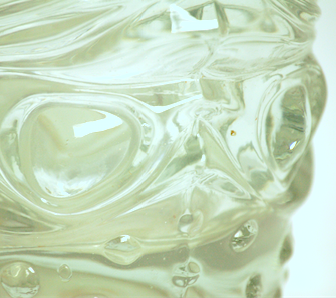 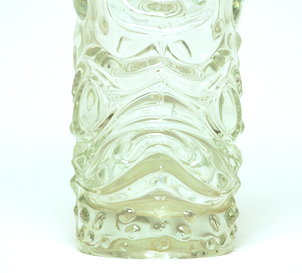 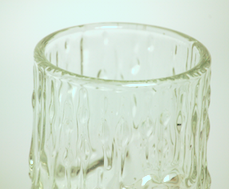 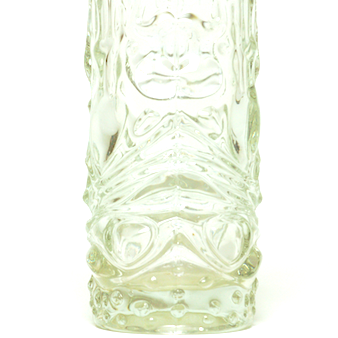 This vase with its balanced organic yet geometric shapes and distinctive texture is model nº 20235 called 'Dragon's Head' and was produced in 1972 by the Hermanova Hut glassworks (part of the Sklo Union group by 1965).

Designer František Pečený attended the College of Arts and Crafts in Prague. In 1947 he became an artist with the Hermanova Hut glasfactory. Together with designers such as Urban, Vizner and Jurnikl they gave an unmistakable appearance to Czechoslovakian pressed glass in the post WOII period.

Much of Pečený's pressed glass designs were exhibited all over the world including during the World Fair in Brussels (Expo 58).

The vases Pečený designed have characteristically thick relief décor making the most of the optical quality of glass adding a lens effect to the fluent ornamentations.

The Hermanova Hut glass factory was founded in 1907 and began producing pressed glass in 1910. In 1965 it became -just as the Rudolfova factory- part of the Sklo Union group which produced several designs by Pečený and exciting -now iconic- designs by Vladislav Urban, Jiři Brabec, Rudolf Jurnikl, Rudolf Schrotter and František Vizner.